Special Voice Concerns of the Female to Male (FtM) Transition

Approximately 25% of the cases of individuals who show a strong desire to belong to the sex opposite of what was assigned at birth are those who wish to transition from Female to Male (Van Borsel, De Cuypere, Rubens, & Destaerke, 2000). Much of the current studies and research into voice therapy and working with the transsexual population is geared towards those transitioning Male to Female (MtF).  Part of this is because for those transition FtM, the administration of androgen therapy (testosterone injections) typically results in a lowered pitch, so many people feel that additional voice therapy is not needed.  There are, however, concerns that other characteristics of speech might be more gender-specific (such as prosody, pragmatics or spectral variability) and that testosterone does not always drop pitch low enough for FtM's to be perceived as male. In addition, some people choose not to undergo testosterone therapy, as addressed here.

However, because the vast majority of those going through a Female to Male transition do utilize hormone therapy, some of the voice effects of testosterone are discussed on this page.

How Important is Voice?

Individuals who wish to undergo sex reassignment surgery are often required to live as their intended gender for a period of time (WPATH, 2012). Voice is an important factor in "passing" during this time. "Gendered passing refers to an individual’s ability to be regarded by others in  accordance with one’s preferred gender role in a socio-cultural context." (Transgender of New Hampshire, n.d.)  Passing could refer to a telephone voice or in person voice as well as physical appearance.

A blogger at The Label Game posts a heartfelt essay, It Hurts when you misgender me" on what it feels to be misgendered (or publically referred to as the gender opposite what the person feels he/she is).   "At any time... I am  living in almost constant discomfort. The space between the times when I am actively being misgendered is usually occupied with wondering when the next incident is going to happen. It's painful, like spending my life walking between  bees' nests; I can stay as far away from them as possible but in the end I know  that I must keep moving and that, when I do, I'm liable to be stung at least  every few minutes and as soon as the last one stops aching another one is liable to hit. And each of these instances chips away at my feeling of self - because  it is very hard to maintain that feeling when no one in your life is reinforcing  it."

Effects of Testosterone on Voice 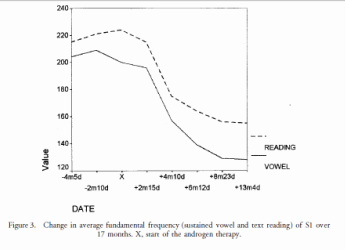